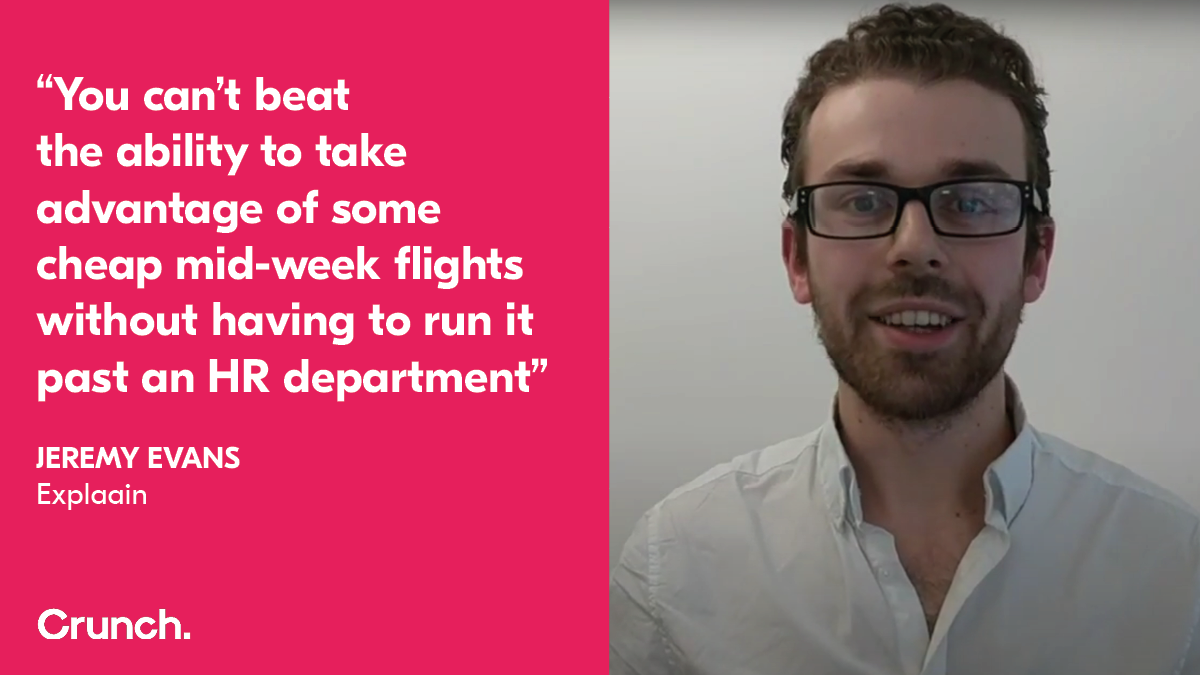 Continuing our Crunch Chorus Stories series, Explaain founder Jeremy Evans shares his experiences of running a startup. Want to share your story with the world? Drop us a line at crunch-chorus@crunch.co.uk.

Tell us a little about yourself and Explaain

Our mission at Explaain is to make it ten times easier to read the news.

We do this by adding a layer of interactive fact cards to news articles, meaning that instead of reading the same, static article as everyone else you can answer any question you have without leaving the page.

We also created the voter advice tool GE2017.com, which was completed by a record-breaking 2 million people and was built entirely out of Explaain cards.

What prompted you to start your own business?

I’ve always wanted to try and find a way to make a big impact on how we run society. I became a journalist to help inform society so we can create smart citizens and savvy voters.

I soon became frustrated with the backward ways in which journalists are forced to convey information, so started to develop user interfaces that would better serve the 21st century reader.

Approaching this mission as a business has always felt the natural way to ensure that it becomes self-sustainable enough to make a real impact in a short space of time. That’s how Explaain was born.

What were the biggest challenges you had to overcome when starting out?

Creating a startup that is unshakeable in its mission to do good is a tough ask, mainly because this usually reduces the chance of making huge amounts of money.

Doing so in journalism is tougher still because the news industry is struggling to work out how to remain valuable.

It took us a long time to carve out a space for ourselves that perfectly aligns mission with profit. But it was time well spent.

Related to this was getting funding, and we were very careful about only pursuing money that was aligned with our purpose.

Grants from Google and the European Commission for journalism projects were the perfect solution to this and we feel very lucky to have them.

What do you like most about working for yourself? And what do you dislike?

You can’t complain about the flexible hours, location and work patterns. Whether it’s avoiding rush hour, working from home or taking regular walking breaks, there are major advantages (read: liabilities, at least if you have a work ethic as poor as mine) to working for yourself.

“At no point am I left thinking that I should be spending my time differently right now and wishing I had the power to make that call.”

But for me, these are eclipsed by the constant knowledge that I am doing what I am doing right now purely because I choose to. There is no boss to secretly disagree with, and no company structure to have to contend with. At no point am I left thinking that I should be spending my time differently right now and wishing I had the power to make that call. Having said that, if you do fancy having a boss and all that comes with it, we’re currently hiring at Explaain!)

When the UK Snap Election was called, we immediately dropped everything in order to focus on helping people navigate through the complex political climate that we’re currently in.

We ended up building GE2017.com, which was both the most intense and the most rewarding project we’ve ever worked on.

We barely slept but by the time voting closed over 2.1 million people have completed the tool – nearly double the previous record for a voting advice tool.

The feedback we got was incredible, and we’re now working with other organisations that created similar sites to collaborate on an all-purpose tool for the next election.

Looking back, is there anything you would have done differently when starting up?

How long do we have?! I’ll try and stick to three things.

Firstly, I would have kept The Lean Startup at my side at all times and forced Explaain to do nothing but build-measure-learn. This can feel like it’s achieving very little but there is no door you can’t open if you have proper evidence to support your assumptions.

Secondly, I would have told everyone, everywhere about Explaain, what we were doing, when we were going to do stuff by, and specific details that made us as accountable as possible. Not only would we have been forced into delivering things sooner, we would have avoided the lack of attention, advice and network benefits that comes with being too secretive or cautious.

Finally, I would have focused at least 30% of my time on finding a co-founder. Matt is the perfect other-half to Explaain, but it took me a year and a half to get out there and find him. Talk about wasted time!

What would be your top tip for anyone thinking about starting out on their own?

Find something you care about so deeply that the idea of having a stable job suddenly seems not so important compared to what really matters in life.

Then figure out a way to make that thing happen – if it can be via selling something to someone then you’ve got yourself a business.

If that business will be aiming for massive growth in return for huge uncertainty then that business is a startup, and you might end up changing the world.

Do you have any pro tips on how to find new clients?

Whatever you’re doing, give it away for free for now, and beg people to just try it out. If it fails, those first few revenues won’t matter because you learned quickly not to waste more time on a fruitless project. And if it succeeds, they’ll matter even less.

Do you work from home or in a coworking space? How do you find that work environment?

I’m currently based in a coworking space, but I regularly work in cafes and from home too.

I find that my mood and energy levels vary throughout the day, and try to match these with different environments as I go. For example, if I’ve been putting off an important but daunting piece of work, eventually I’ll go to a cafe, buy a nice coffee, plug in the headphones, tell a friend (for accountability’s sake) that I’m going to have it done in an hour, and then feel like I have no choice but to get the hell on with it.

How did you find the transition to self-employment?

I enjoyed my last job a lot, but I’ve never looked back. Self-employment always means being on the brink of disaster for someone with my lack of self-control, but I wouldn’t have it any other way. It allows you to live your life how you want to live it, which is a freedom to treasure.

Has being self-employed held you back in any way, for example when getting a mortgage?

I’m too young and broke to think about getting a mortgage, but renting a flat was admittedly an issue. However, even in the last two years this has become easier – thanks, appropriately enough, to startups disrupting the rental market.

Being self-employed also devalues the concept of ‘evenings’ or ‘the weekend’, so it’s important to try and keep some of the social importance of things like this. That said, you can’t beat the ability to take advantage of some cheap mid-week flights without having to run it past an HR department…