Three Business Lessons From The Rock 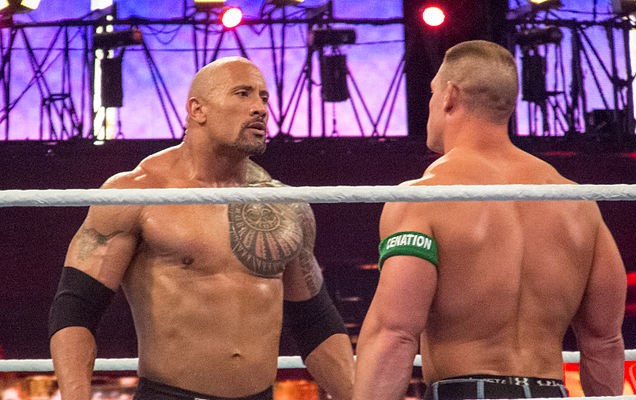 Of all the most sought-after box office stars in the world right now, few are more successful or universally popular than all-round nice-guy Dwayne Johnson. You perhaps might know him better by the alias of his spandex-clad, smack-talking alter-ego, The Rock.

Clichés notwithstanding, his ascension from allegedly having seven bucks in his pocket to running his own production company - Seven Bucks Productions -  makes him quite the fitting icon for aspiring freelancers, contractors and small business owners around the world to learn branding lessons from.

And as he’s in VERY high demand these days, I guess I’ll have to do the honours of relaying three of them.

If it's broke, fix it

Heralded as the first third-generation performer in company history, the smiling youngster proudly announced before his arrival that he was paying homage to his wrestling Dad Rocky Johnson and Grandad ‘High Chief’ Peter Maivia.

A new babyface (i.e. a wrestling goodie) character ‘Rocky Maivia’ was born... and alas, the WWF audience were having absolutely none of it.

You see, the mid-to-late 90’s on American TV was not a good time to be a simpering, high-fiving goody-two-shoes (and come on, that haircut and outfit did him no favours). Edgier content like South Park and the Jerry Springer show were major mainstream success stories around this period, and the grappling world was no different. Anti-heroes like the foul-mouthed, beer swilling rebel ‘Stone Cold’ Steve Austin gained rabid popularity, leaving the more traditional good guys in the dust.

Try as he did to ‘get over’ (wrestling vernacular for getting the crowd invested in your character), poor Rocky just couldn’t get the people to cheer for him, instead hearing chants whilst performing of ‘Rocky sucks!’ and even more upsettingly, ‘Die Rocky Die’.

This was of course, until Dwayne was given an opportunity to become a bad guy (a ‘heel’), convincing the showrunners to let him grab a live microphone and let rip on his haters.

There’s a cliché that the best characters in wrestling are an extension of the person playing them, but ‘turned up to eleven’. In the semi-scripted nature of the show, the real-life frustration of being so harshly rejected by the audience he had worked so hard to entertain morphed cuddly Rocky Maivia into a convincing and effective villain.

Before long he had transformed from a mild-mannered afterthought into ‘The Rock’; a brash, overconfident loudmouth superstar, who would make Elvis look unsure of himself. The Rock went on to become arguably the biggest name in professional wrestling, going on to headline the industry’s biggest show Wrestlemania four times.

‍The lesson:  Patronising your audience will get you nowhere. Listen to them - no matter how bullet-proof you’re convinced your idea is, your paying customers probably know what they want better than you do.

Of course, unlike WWE, you probably don’t have the luxury of audiences literally cheering and booing your ideas, so do you’ll need to do your market research and pay close attention to your findings.

If it ain't broke, don't fix it

As much of a once-in-a-lifetime entertainer as he was in the ring, Johnson was never the most impressive technical wrestler. His gift-of-the-gab and unmatched charisma put the butts in seats in arenas around the world, but you could almost count the amount of technical wrestling moves he would pull off in any given match on one hand.

While his limited routine may have irritated a section of die-hard fans yearning for something a bit more varied, millions and millions of casuals tuned in every week to watch him go through the motions, as they had for the likes of Hulk Hogan and the Ultimate Warrior hamming it up a decade prior.

‘The People’s Elbow’ - his grand finale, was coined ‘the most electrifying move in sports entertainment’, and this wasn’t just a cheesy marketing slogan. The camera flashes in the audience would all go off in unison and the arena crowd would whip themselves into a frenzy as they watched ‘The Great One’ run up and down, do a silly dance, and flop a weak-looking arm onto his fallen opponent, miraculously disabling them for a three-count.

It looked utterly ridiculous, but didn’t matter one bit - his fans couldn’t get enough of it.

His familiar act became so beloved and merchandise so popular that WWE had no choice but to turn him into a good-guy again, this time much more successfully from both critical and financial standpoints.

‍The lesson: Find what makes you stand out, then make sure it’s the centre-point of your business. In other words, if it works for you - be a specialist, not a generalist.

After a relatively short tenure of wrestling full-time, the ‘People’s Champ’ found himself being cast in major motion pictures, and started to gain household name status outside of the WWE bubble.

Despite appearing in his fair share of critical calamities (from ‘The Tooth Fairy’ to ‘Doom’) he was able to showcase an adaptability early into his film career that opened him up to many roles (once he’d scrapped his agent).

The Hollywood Reporter said of our musclebound hero: “Combining several traits of the '90s action stars — the wit of Willis, the strength of Schwarzenegger, the heart of Stallone — he's become the go-to guy for studios anxious to reboot their franchises.”

Wrestlers like ‘Rowdy’ Roddy Piper and Hulk Hogan had dabbled with Hollywood in the past, but none had matched the success of The Rock. His success also paved the way for wrestling stars John Cena and Dave Bautista to pursue their own so-far successful film careers.

‍The Lesson: While it can be comforting being attached to a company, as the man himself would say, “It doesn’t matter!”

‍Going it alone can yield bigger and better gigs, often for more money. Check out our guide to starting out freelancing, if you smell-la-la-la-la what we’re cooking.