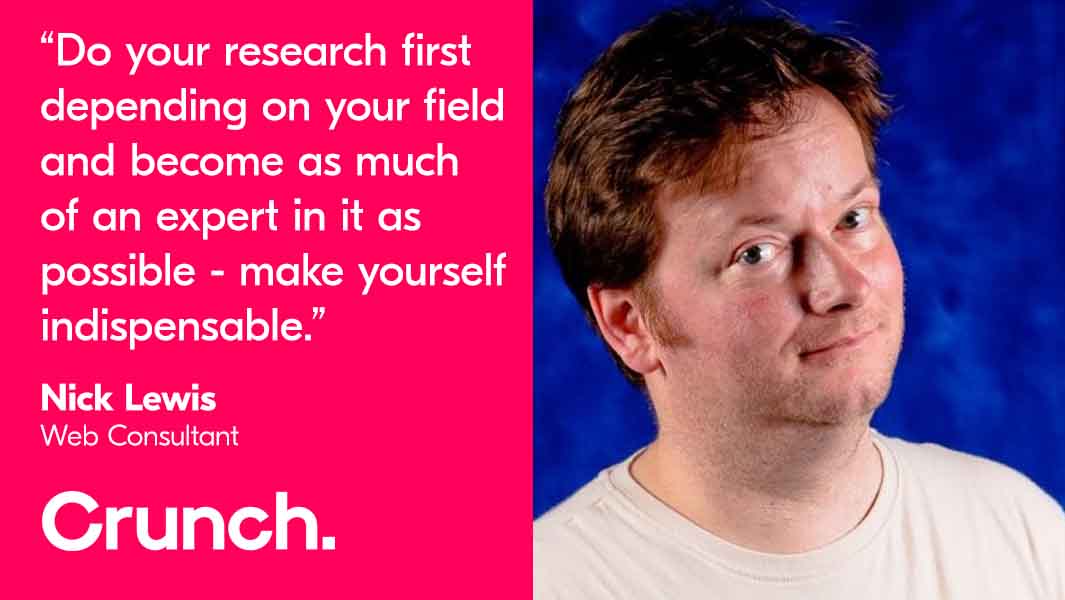 From being made redundant in 2002 to playing a part in the launch of “Boris Bikes”, Nick Lewis gives his insight into becoming a self-employed Web Consultant.

Tell us about your business!

I have always been interested in computers and cameras, so, on one hand, I’m a Software Engineer and on the other I am a Photographer. Currently, my business is more focused on contracting work and, specifically, a lot of what we call “front end” web development, which is very much in vogue at the moment, so most of my assignments tend to follow that path. Ideally, I wish to go a bit more freelance in the future and produce a website or series of sites that engage my broader skills more, so websites that are very photographic. I’m always open to any collaborations people may have on offer out there for the right kind of money!

What prompted you to go self-employed?

In 2002, I was made redundant from my last permanent job, which was sad at the time, as I liked the people I was working with but the company employed some contractors. I had been asking a couple of these people about this line of work and had decided one day to go self-employed. A year later, I was out of the job, on a skiing holiday, spending more time in an internet cafe than actually doing what I was out there to do (to be honest the snowfall was also pretty poor). I was spending my redundancy money as cautiously as I could and then I saw an advert for a contractor role which turned out to be ideal. I got it and not long afterwards I was running my first contracting business where most contracts ran for about a year at a time.

What were the biggest challenges you had to overcome when starting out?

You may notice I said started my first company in 2002 and this was before Crunch began trading, so at first we made the crazy decision to do our accounting ourselves and in the end we just couldn’t work out how to run payroll properly. I say “we” because my Dad at the time was my Company Secretary and he had more experience in business than me and helped me a lot. Keeping in work wasn’t too much of a problem but those books, gosh, were a headache at times and above all else I was never sure we were doing any of it right and feared being penalised by HMRC every day!! I then shut the business down due to poor health but five years later around 2010, having recovered, started my new company and that is when I switched to Crunch and made a fresh start entirely.

What do you like most about working for yourself? And what do you dislike?

I can choose which companies I work with and the sort of projects they’re embarking on. A lot of this is based on the technologies they work with. So being a web developer, JavaScript is king, especially as now you can use it for building websites and mobile apps. So that has opened up loads of opportunities. Most of all I can jump from one industry to another as my skill set is very universal and meet lots of different people. I can also choose when to take a break, so when my current role ends in October, if it’s not extended, I can take a break or busy myself in finding something new straight away that gives me three to six months’ worth of work, then take a break in spring when the weather is nice. That’s when I could fit in a photographic project!

How has Crunch helped you during your self-employed journey so far?

Crunch has really covered every base for me when there have been problems to overcome, or better still, help me avoid such pitfalls before I clumsily stumble into them. I’m no accountant and bookkeeping was always really hard, so I am very glad I came across them nearly 10 years ago! They help me worry less about tax and handling my payroll is now such an easy process. I always feel that I can rely on them to answer any questions I throw at them! Suffice to say responses are quick as ever despite their massive growth since their early days – so many companies would buckle under the strain and struggle to keep up with their clients’ needs.

What’s your biggest success story from your time being self-employed?

I did for a period of time work with Transport for London and one project I was involved in was the famous Cycle Hire project (back when Barclays were its sponsor) and they became better known as “Boris Bikes”. I was one of the developers who worked on the website part of it which helped people find bike charging points and map routes for their journeys. There were a lot of us working on the project plus an external company, so I played a small part in its success, I guess, but they were exciting times.

What would be your top tip to anyone thinking about going self-employed?

Do your research first depending on your field and become as much of an expert in it as possible – make yourself indispensable if you go into something such as contracting, so you get plenty of extensions, as that looks good on your CV!