Taking on an apprentice - the full details 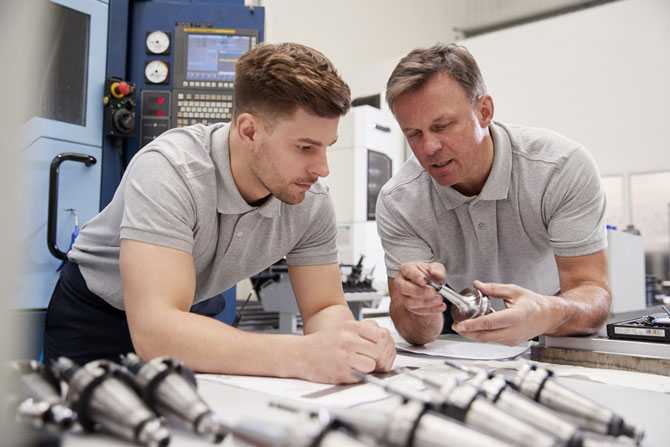 Apprenticeship schemes are often in the news - and not always for the right reasons. We’ve had a look at what they are and where you can find out more details about them.‍

Many UK businesses find that skills shortages and recruitment difficulties are a big problem. Apprenticeships can be an answer as they combine working with studying that leads to nationally recognised qualifications.Apprenticeship schemes can ensure companies have the right practical skills and qualifications in their workforce and ensure the company keeps up to date with the latest technology and practices.

Apprentices must work with experienced staff, learn job and specific skills and study during their working week (study at college or a training organisation, for example).

The apprentices themselves tend to be more motivated and loyal to the company that has invested in them, as they’ve made a choice to learn about a specific job at work.

What is an apprentice?

Apprentices are full employees employed on an apprenticeship agreement, which is a contract of service, so the apprentice undertakes to work for the employer and is treated as a normal employee. The agreement must be in a prescribed form (from 6th April 2012 following the Apprenticeships, Skills, Children & Learning Act 2009).

Employers can use apprenticeship schemes to train both new and existing employees and funding is available from the government to train apprentices.To start an apprenticeship, an individual needs to be aged 16 or over (by the end of the summer holidays) and cannot be in full-time education.

For further help, you can contact The National Apprenticeship Service by email, nationalhelpdesk@findanapprenticeship.service.go.uk, or by telephone on 0800 015 0400.

If you’re thinking of hiring an apprentice, there are certain obligations you and your apprentice will need to meet before you can take them on:

A framework is a document that’s used by colleges, employers and training providers to make sure apprenticeships programmes are delivered consistently and includes the name of all qualifications, and how long the apprenticeship will take.

The details on how to hire an apprentice are available here, including:

There are four levels of apprenticeship available:

Apprenticeship vacancies are found, in England, on the EFSA website here. Details of apprenticeships and vacancies (for employers and individuals) in Scotland is here.

Details for Wales are here, and Northern Ireland here.

Apprenticeship funding is available for employers from the government. The size of the funding you will receive varies depending on whether you pay the apprenticeship levy or not. Prior to 1st April 2019, non-levy paying companies had to pay 10% of the cost of training and assessing each apprentice.

However, from 1st April 2019, this was reduced to 5% of the cost. The government funds the remaining 95%. Companies need to agree a payment schedule with a training organisation and pay them directly. Companies may be eligible for extra funding depending on their and the apprentice’s circumstances - you can read more here.

In August 2020, the government announced incentive payments for employers hiring a new apprentice between 1 August 2020 and 31 January 2021. You can read the details at gov.uk.

The apprenticeship levy was introduced on 6th April 2017 and requires employers with pay bills of more than £3million to pay 0.5% of their annual pay bill to the levy fund. A levy allowance of £15,000 pa can be offset against the levy.

The levy charge is paid through the PAYE process to HMRC and it must be paid by all companies, with pay bills of more than £3million, even if they do NOT employ apprentices.

Once the levy has been paid employers can access funding for apprenticeships through an online account. However, the funds expire after 24 months if they have not been spent by the employer.

The fund must be spent on apprenticeship training using approved providers. The government adds a 10% top-up to the employer’s fund.

The apprentice, for the purposes of the levy, can be any employee who wishes to receive training to provide them with new skills – but they must be released for 20% of their time for off-the-job training.

The government had set a target (in 2017) of achieving an additional 3 million apprenticeship ‘starts’ by 2020. However, since the introduction of the levy, apprenticeship ‘starts’ have fallen significantly. Many employers are critical of the scheme as they regard it as another tax on business, or think it’s too complicated and inflexible (and many employers find the 20% off-job-training time a major problem).

However, it was reported, in April 2019, that there has been an increase in 2017/18 of higher-level and advanced apprenticeships being introduced by businesses, but overall the number of apprenticeships are still lower than before the levy was introduced.

With regard to the allegation that the levy is another business tax: between April 2017 and November 2018, the levy paid by all employers was in the region of £4.5billion.

In the period from April 2017 to September 2018, only £370million had been paid out to providers. One commenter estimated that in April 2019, the government will absorb all the payments that were made into the levy fund in April 2017, which remain unspent (as the funds expire after 24 months) – and this could see £200million per month being transferred from training funds to government funds, with the same happening each month afterwards!

If you are an employer and need ongoing professional help with any staff/freelance issue then talk to Lesley at The HR Kiosk – a Human Resources Consultancy for small businesses – our fees are low to reflect the pressures on small businesses and you can hire us for as much time as you need.